UFC Women’s Champion RONDA ROUSEY (Furious 7) have signed on to star in her own autobiography film MY FIGHT/YOUR FIGHT.

The film is being adapted by MARK BOMBACK (The Wolverine) from the book ‘My Fight/Your Fight’ written by Rousey and her sister Maria Burns Ortiz. The autobiography follows her inspirational journey on her path to being one of the most dominant fighter in the world.

Paramount will distribute the film with Rousey and Mary Parent producing.

No start date is scheduled yet as she will be busy training for her next UFC fight at the end of this year.

She is also attached to the Peter Berg actioner MILE 22 co-starring Iko Uwais (The Raid) and Mark Wahlberg (Lone Survivor), which starts production in January 2016. Most likely ‘My Fight/Your Fight’ will start shooting right after that sometime in Spring of 2016. 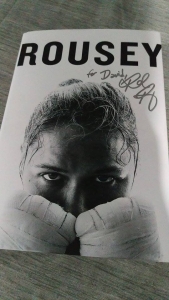 I was lucky enough to meet Rousey at a recent book signing and let me tell you, she is one of the most down-to-earth ‘tough girl’ in the business. Her book really does chronicles her struggles and the many challenges she had to face to be where she is today. I definitely can not wait to see this translated on the big-screen.