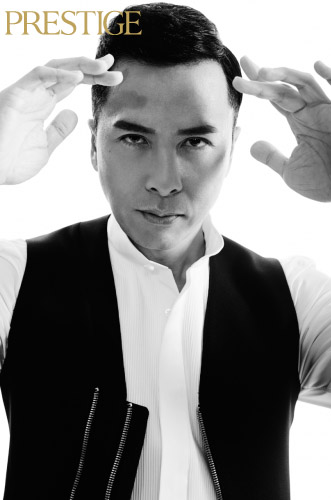 DONNIE YEN, Hong Kong’s current ‘King of Action’ and best known worldwide for his role as Bruce Lee’s master in Wilson Yip’s IP MAN, recently sat down with Prestige Hong Kong to discuss what motivates him at the age of 50 to continue doing what he does best and why he finally accepted a role in the upcoming sequel to the blockbuster hit CROUCHING TIGER, HIDDEN DRAGON.

Asked specifically what most impacted his rise to success in recent years, Yen says marrying his wife was the major turning point in his career:

“It’s her whole perspective on life, and I’d like to think she’s brought the best out of me. I’ve been in the business for 31 years and a lot of people question why it took until the past six or seven years for me to get really successful. It seems the older I get the more success I get, which is unusual. Usually an actor’s career flourishes in the late-20s to mid-30s, but I started booming after 40, and it’s not slowing down. For a long time I was travelling on my journey but I felt I hadn’t found a base. She’s given me that with our wonderful family.”

Asked about how he got swayed to get involved with the upcoming sequel to ‘Crouching Tiger, Hidden Dragon’ and how excited is he about the project, he said:

“To be honest, I’m calm. I’m not taking it for granted but I’m more excited about taking my family to New Zealand. I told (Producer) Harvey Weinstein that. He approached me for the last three years and I kept turning him down. I told him I wasn’t really interested in the film. I said it’s not that I don’t have respect for the franchise and the brand and yourself – you’re one of the greatest producers in the industry – it’s just that as someone who has been in the business for a long time, it doesn’t appeal to me. I played these roles a thousand times and I’m not looking to break into Hollywood. You have to give me a reason to look forward to the role. He was shocked. Several things (finally swayed me). The fact that it’s being shot in English – a Chinese-language costume drama but in English. This is something I’ve never done before. As an actor I still have a lot of passion to see how far I can go. And the other big reason is New Zealand, with the Lord of the Rings studio.”

As for his recent signing with Hollywood’s CREATIVE ARTIST AGENCY, he said:

“I’m not trying to break into Hollywood. I’m quite comfortable making films here, and my home is here. I’ve had scripts and roles offered to me periodically, for example The Expendables I and 2. I said I appreciated the offer but I just didn’t want to spend three months on a movie where I’m one of the backdrops. I turned them down in a very gentlemanly way. But Creative Artists came along and it doesn’t hurt to have the best agency in the world helping you. It’s still not my intention to ever say I’m going to move back to LA, because this is my home.”

Yen made it pretty clear that his top priority is not to break into Hollywood, but to choose and accept projects that is new and fresh to him. He wants to do something that he have never done before, so an English-spoken Wuxia flick like ‘Crouching Tiger, Hidden Dragon 2: The Green Destiny‘ definitely fit the bill. This movie will also give Donnie a chance to reunite with the man that discovered him, director and action choreographer YUEN WOO PING (Tiger Cage 2, Iron Monkey).

Production on ‘Crouching Tiger 2’ is set to start this July in New Zealand for a release in late 2015. Yen have quite a few other project lined up as well including TEDDY CHEN’S KUNG FU JUNGLE aka LAST OF THE BEST (set to be release at the end of the year), DEREK KWOK’S DRAGON CITY, and a return to finish off the ‘Ip Man’ trilogy in WILSON YIP’S IP MAN 3D.

Hitting 51 years old and still going strong, it does not look like Donnie Yen will be slowing down anytime soon. The best is yet to come.

Head on over to Prestige Hong Kong for the FULL INTERVIEW.