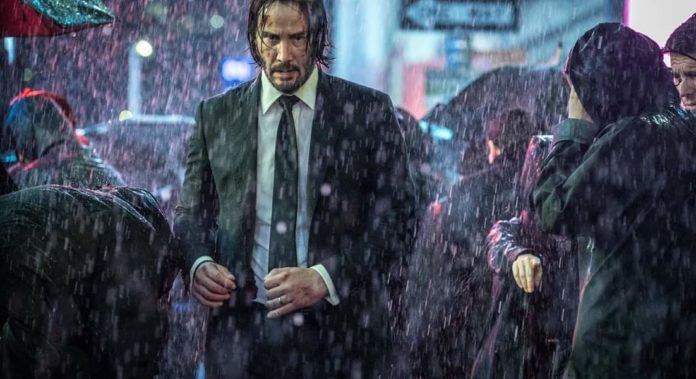 UPDATE: Check out the character Posters below and stay tuned for the 2nd Trailer tomorrow!

When asked by Comingsoon.net regarding the title, Reeves explains the meaning of ‘Parabellum’ stating:

“Prepare for war. It’s part of that famous sentence, “Si vis pacem, para bellum,” which translates as, “If you want peace, prepare for war.”

Marjanovic will portray one of the many assassins going after Keanu Reeves’ ‘John Wick’.

I am Sofia 💋 #johnwick3 @rikerbrothers

UPDATE: Contrary to previous reports, Hiroyuki Sanada is NOT the “main” villain after all. According to HOLLYWOOD PIPELINE the main baddie of the film is none other than martial arts star MARK DACASCOS (Drive, Crying Freeman)!

Check out the behind the scene video and image below of Dacascos in character as the villain named ‘Zero’ along with LAWRENCE FISHBURNE reprising his role as the ‘Bowery King’. (MINOR SPOILER WARNING. WATCH AT YOUR OWN RISK!)

UPDATE: The studio is currently casting for a female lead with none other than HALLE BERRY (Kingsman: The Golden Circle) as their top choice.

The role is for a character named ‘Sofia’ who is described as being a “woman, 20-40, who has a small child”. Not much else is known at the moment so stay tuned for confirmation.

UPDATE: The official synopsis has been revealed at CinemaCon:

“John Wick (Keanu Reeves) is on the run for two reasons… he’s being hunted for a global $14 million dollar open contract on his life, and for breaking a central rule: taking a life on Continental Hotel grounds. The victim was a member of the High Table who ordered the open contract. John should have already been executed, except the Continental’s manager, Winston, has given him a one-hour grace period before he’s “Excommunicado” – membership revoked, banned from all services and cut off from other members. John uses the service industry to stay alive as he fights and kills his way out of New York City.”

UPDATE: CHAD STAHELSKI has been officially announced to return as director for JOHN WICK: CHAPTER 3 with Japanese actor HIROYUKI SANADA (Rush Hour 3, The Last Samurai) cast as the film’s villain, head of a Japanese crime syndicate.

Production start date is set for April 26th, 2018 in New York and Montreal, with possible additional photography in Russia, Spain, and Tokyo.

UPDATE: ‘John Wick: Chapter Two’ grossed over $165 million worldwide, so to no surprise a third chapter is on the fast track. Director CHAD STAHELSKI revealed some details on the direction ‘Chapter Three’ is moving forward with by stating:

“We want, not so much to go bigger on the third one, but to show you more of the intricacies of the world… I feel like there are all these different subtleties that I skipped over in Number Two, that I’d like to go back to on [chapter three] and show you the inner workings of different parts of New York. So rather than massive set pieces, I’d like to show you cooler and more intricate ones… I think it would be a mistake budget wise and creatively to just go big and blow up a freeway. That’s not our gig. That’s a comic book or a Bond gig. We want to show you cool and intricate details. What are those little details in everyday life? Hopefully – we make people look at garbage collectors and cleaner vans and homeless people a little differently now.”

Asked if Stahelski will return to direct, he replied “Currently I’m acting as prep director. Hopefully everything will work out time wise. Of course — I would love to…”

Pre-production has officially started and casting is set to begin after the holidays.

A release date for the third installment of the ‘John Wick’ franchise is targeted for May 17th, 2019.

‘John Wick: Chapter Two’ have not even hit theaters yet, but director CHAD STAHELSKI revealed that a third film to cap off the trilogy is already in the works!

Stahelski told COLLIDER: “The studio has asked us to put our heads together and see if we can come up with something. Winston’s [McShane] is a big part of the next one, so is Lance Reddick. We’ve got some ideas.”

‘Winston’ as we all know is the man running the ‘Continental’, the assassin hotel featured in the first ‘John Wick’.

But not to look too far ahead, lets turn our excitement towards JOHN WICK: CHAPTER TWO which is set to hit theaters on February 10th, 2017!