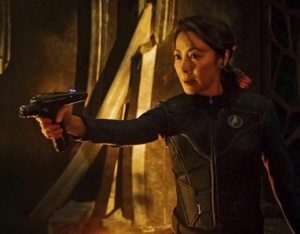 UPDATE: Check out the first Trailer!

SYNOPSIS: Set roughly a decade before the events of the original Star Trek series, separate from the timeline of the concurrent feature films, Discovery explores a previously mentioned event from the history of Star Trek while following the crew of the USS Discovery. 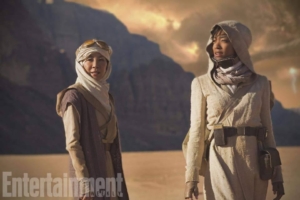 SONEQUA MARTIN-GREEN (TV’s The Walking Dead) takes on the lead as the First Officer of the ‘Discovery’ alongside ANTHONY RAPP (Rent), DOUG JONES (Hellboy), and MICHELLE YEOH as the captain of another spaceship.

The series is executive produced by BRYAN FULLER (Hannibal) with GRETCHEN BERG, AARON HARBERTS and Oscar winner AKIVA GOLDSMAN (I Am Legend, A Beautiful Mind) serving as producers. Check out the previously released teaser below.

‘Star Trek: Discovery’ is set to blast off on CBS television network in May 2017.