UPDATE: A behind-the-scene image has been released (via Entertainment Weekly) featuring RALPH MACCHIO and WILLIAM ZABKA reuniting on the set of COBRA KAI! 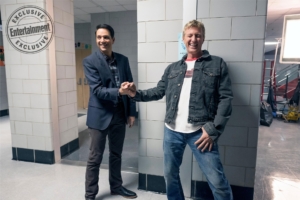 “Sweep the leg” and knock me out! Another sequel to ‘Karate Kid’ is coming! Original star RALPH MACCHIO is set to return alongside WILLIAM ZABKA for a sequel series titled COBRA KAI.

The series will span 10-episodes on YouTube Red and will take place thirty years after the events of the 1984 All Valley Karate Tournament.

SYNOPSIS: Thirty years after the events of the 1984 All Valley Karate Tournament, a down-and-out Johnny Lawrence (Zabka) seeks redemption by reopening the infamous Cobra Kai karate dojo, reigniting his rivalry with a now successful Daniel LaRusso (Macchio), who has been struggling to maintain balance in his life without the guidance of his mentor, Mr. Miyagi. The show is about two men addressing past demons and present frustrations the only way they know how: through karate.

A more comedic twist will be added to the series with the writers of ‘Hot Tub Time Machine’, Josh Heald, Jon Hurwitz, and Hayden Schlossberg executive producing and handling the script.