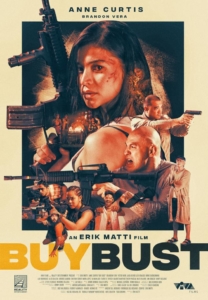 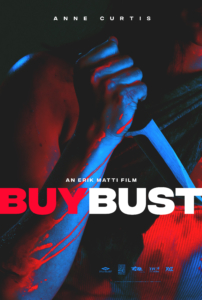 SYNOPSIS: After surviving the slaughter of her entire squad in a drug raid compromised by dirty cops, anti-narcotics special operative Nina Manigan (Anne Curtis), is eager to go head-to-head with the drug cartels that hold a bloody grip on Manila. But when her new mission in the city’s most dangerous slum goes south, the angry civilians turn on her squad. Trapped between a brutal drug gang and hordes of bloodthirsty citizens, their only option is to fight their way out, turning one claustrophobic street at a time into a symphony of apocalyptic violence.

UPDATE: Have a look at the red-band Trailer!

‘BuyBust’ is set for a domestic August 1st release and a limited August 15th release in the U.S./Canada via Well Go USA. 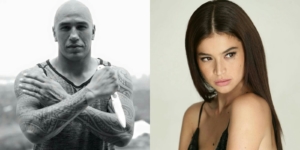 Even though there is no martial arts shown in the teaser above, the film is said to incorporate multiple styles of traditional Filipino martial arts (arnis, eskrima and kali systems) with no stunt doubles or cgi. Check out some of the behind-the-scene videos below.