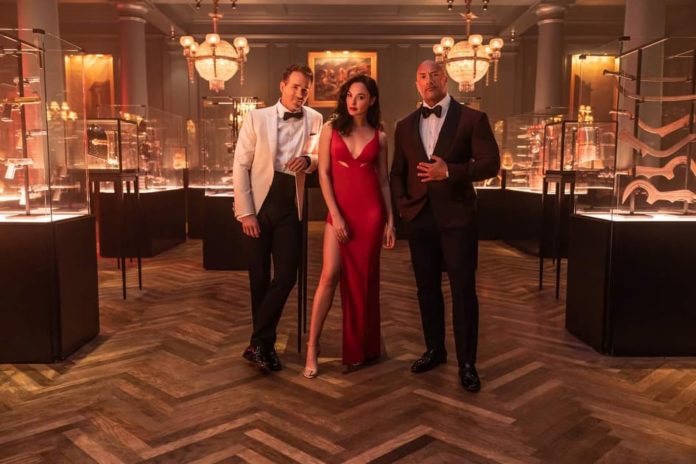 UPDATE: Check out the action clip from Red Notice below!

Synopsis: An Interpol-issued Red Notice is a global alert to hunt and capture the world’s most wanted. But when a daring heist brings together the FBI’s top profiler (Johnson) and two rival criminals (Gadot, Reynolds), there’s no telling what will happen.

UPDATE: Red Notice is set to premiere November 12th only on Netflix.

UPDATE: Netflix is looking to add yet another superstar to the mix as Tom Cruise (Mission: Impossible franchise) is in early talks for a cameo appearance in Red Notice.

Similar to Ryan Reynolds’ cameo role in last year’s Hobbs & Shaw, Netflix’s plan is to set the stage for Cruise to play an even larger part in a potential Red Notice sequel. If a deal can not be reached with Cruise, the studio’s plan is to look “for a star of similar magnitude as Cruise. Which is a very short list of Hollywood stars.”

Red Notice follows Johnson as “an Interpol agent tasked with capturing the most wanted art thief in the world (Gadot), while Reynolds’ character has been described as simply, “the world’s greatest con-man.”

The film is set for release only on Netflix sometime in 2021.

UPDATE: Deadpool star Ryan Reynolds is set to add even more star power to Red Notice as he joins the previously announced Dwayne Johnson and Gal Gadot for the action heist thriller.

The film will now move from Universal Pictures to exclusively on Netflix. The move is due to Universal’s hesitation to fully commit to the $130 million thriller. This resulted in Netflix jumping at the opportunity to distribute one of the most star studded project ever for the company.

Production will start rolling in early 2020.

Gadot will portray a “brilliant and mysterious figure in the art world”. A third leading star will be announced soon as production is projected to start rolling on April 2019 in Europe with a worldwide release date on June 12, 2020.

Look out for Gadot and Johnson to cross paths again after Red Notice as Johnson has signed on to portray the anti-villain Black Adam in the DC cinematic universe.

Action superstar Dwayne Johnson (Jumanji: Welcome To The Jungle) will be adding another project to his busy schedule with the upcoming action thriller Red Notice. Johnson will re-team with Skyscraper director Rawsom Marshall Thurber.

RED NOTICE. Grateful to to finish our business week on such a strong note. In the world of Hollywood deal making – this “Ferocious” bidding war was as big and intense as it gets. Deal is unprecedented. Congratulations UNIVERSAL & LEGENDARY for the win. And a huge THANK YOU to all our studio partners who participated in the auction and pushed all their chips in on our big idea. Respect to my good friend and writer/director @rawsonthurber (CENTRAL INTELLIGENCE, SKYSCRAPER) for once again coming to the table with an original concept idea – that caused big waves in the world of entertainment. Now the fun part begins for all of us.. we roll up our sleeves, dig in and put in the work. Soon the world will see red. I’ll keep you guys posted. #RedNotice @rawsonthurber @flynnpictureco @sevenbucksprod @hhgarcia41 @danygarciaco @universalpictures @legendary

Johnson is looking to earn up to $25 million for the role with Universal and Legendary winning the bidding war for the $125-$150 million budget film.

Plot details are currently unknown but Red Notice refers to “the highest and most serious of Interpol notices (there are eight) and concerns the arrest of wanted criminals”. Johnson will play a man who works for the international police agency.