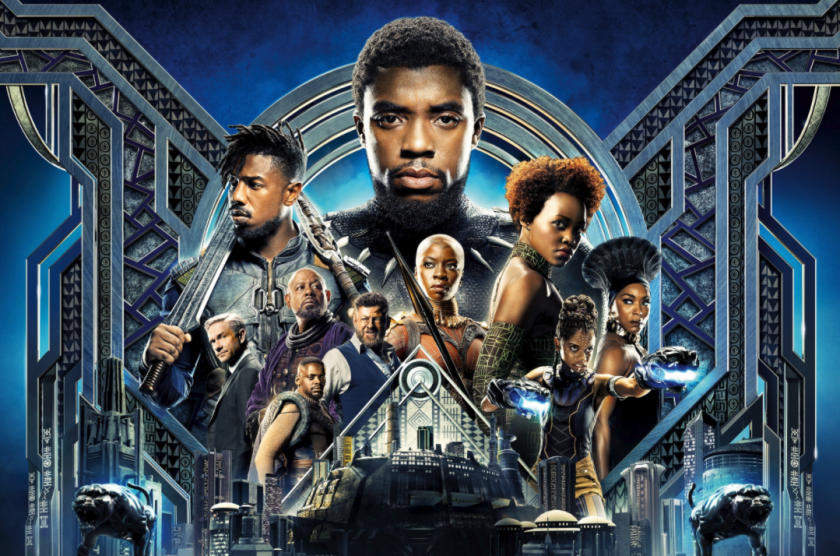 Eighteen movies into the Marvel Cinematic Universe, it’s easy to think (and sometimes proven) that their formula can grow stale. This is especially evident when introducing newer heroes in their own solo outing. Origin stories for superhero movies become more and more apparent that you’re selling the same product. For BLACK PANTHER, it benefits from having its hero already established in a previous movie — Captain America: Civil War.

“Black Panther” is directed by RYAN COOGLER (Fruitvale Station, Creed) and he makes an exciting, yet unsurprising choice. Blockbusters these days are now star-making vehicles not only for the stars, but for the directors that usually have one or two smaller movies under their belt. What Coogler has accomplished here is taking the hallmarks of familiar beats in a superhero movie, but presents them in such a refreshing manner, you almost convince yourself you’ve never seen them before.

This movie is all about finding balance — both in and behind the scenes. Throughout the story, Coogler attempts to balance plot focus and tone (there are elements of intimate drama that would normally clash with the spectacle). There is even a balance of sympathy from character to character. The characters themselves try to balance their ideals, their allegiances and their own demons and morals. Much of the movie revolves around diplomacy and relations with both enemies and allies. The unique thing about the Black Panther is that not only is he a superhero, but he is also a politician, so balance and diplomacy are very important themes throughout.

In a prologue, we are treated to the emergence of fictional African nation, Wakanda, as well as a short, straight-forward explanation of what the Black Panther is and how they have superpowers, told in a bedtime story narrated by T’Challa, played by CHADWICK BOSEMAN (42, Get On Up, Marshall). With such explanations out of the way early, we get more time to focus on characters and the world building of this secret society. 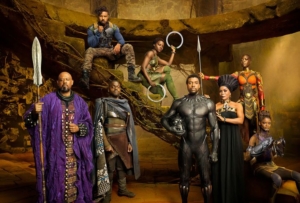 T’Challa is haunted by the memory of his father, T’Chalka, the former King of Wakanda. Not only does he feel guilt for not being able to save him in a terrorist attack, but he also fears that he will not live up to him once he takes the mantle. T’Challa is not alone on his journey though. Black Panther is supported by his right hand General/bodyguard Okoye, played by DANAI GURIRA (The Walking Dead), his tech-savvy sister, Shuri, played by LETITIA WRIGHT (Black Mirror), and his former flame, Nakia, played by LUPITA NYONG’O (12 Years a Slave). He later takes on an ally in MARTIN FREEMAN (The Hobbit) who reprises his role from “Captain America: Civil War.”

The heart of everything in Wakanda is their precious natural resource, Vibranium. Previously introduced as the material Captain America’s shield is made from, here it is their source of energy as well as the foundation for their technology and their weaponry. It’s also the cause of one of the deep debates in the movie since the Wakandans have kept it a secret for fear of abuse of its power. Should they keep it from getting corrupted or should they use it to help the rest of the world? The problem is now a weapons dealer, played by a non-CGI ANDY SERKIS (Lord of the Rings, Planet of the Apes), has leaked some vibranium into the outside world, selling it as a weapon and risks exposing the very fabric of their nation. 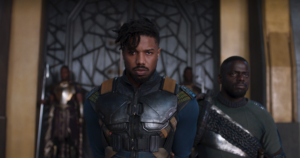 He is aided by an American soldier named Erik Stevens/Killmonger, played by MICHAEL B. JORDAN (Fruitvale Station, Creed). Killmonger is a cold individual who is seemingly in it for the money but may be hiding something bigger. As good as the entire cast is, Killmonger/Michael B. Jordan is the standout. Again, as this movie tries to find balance, this character/actor is trying to find their own balance in internal struggle and, most importantly, tone. It works when it feels like it shouldn’t. What makes it even more gratifying is there is no build for expectation and when this character starts to take over the movie, you find yourself connecting with him, while at the same time, rooting against him. He is one of the most interesting villains the MCU has to offer. 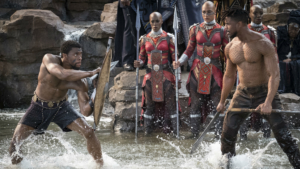 The only thing that doesn’t surpass expectations is the action as a whole. Coogler has staged exhilarating sequences in “Creed” — one of my favorite boxing scenes of all time is the long take fight — but in Black Panther, he may not have had enough experience with large scale action nor CGI to really bring it home. This is even more disappointing since Black Panther is coming off some really enthralling action scenes from “Civil War.” The special effects are rich in color palettes and flowing camera movement, but it doesn’t consistently maintain the grit that Coogler excels at. It’s not a total loss though. There are plenty of combat scenes that display the unique fighting style of Wakanda. The weapon play here is exciting and fierce, however the empty hand-to-hand combat leaves a bit to be desired. In “Civil War,” there is a sense of the filmmakers creating a martial arts style for Black Panther that you can identify as exclusively his, however it never feels fully developed and Boseman, out of the suit, looks to be struggling to sell it. It carries over into this movie, although, when they pick up weapons, the moves become swift and dangerous. The actors seem to feel more
comfortable working with the weapons and it really enhances the drama of the action scenes. The two sequences that really bring this movie to a crescendo in terms of action and drama are the “challenge matches.” These challenge fights are heavy on atmosphere and drama that compliments the fighting and makes you forgive the lack of creativity in the choreography. These scenes are really what make the movie as far as action goes.