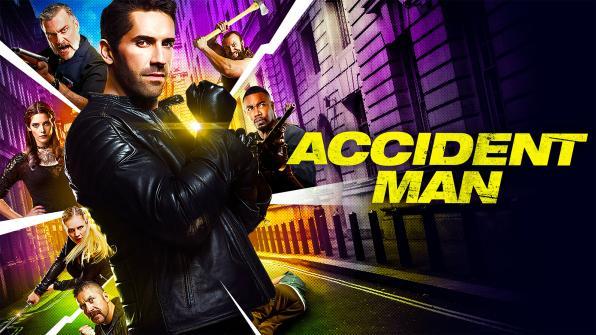 The popular cult action hero of present time, SCOTT ADKINS (Boyka:Undisputed, Ninja 1 & 2) returns with a new fun romp that further solidifies that he is capable of leading a big budget action movie. Adkins has always been on the cusp of Hollywood blockbusters, but mostly as a stuntman or henchmen character. In JESSE V. JOHNSON‘s ACCIDENT MAN, Adkins steps into the writer’s chair along with a producer’s hat on. This makes ‘Accident Man’ a bit more of his baby.

With him being more present creatively, he’s able to give himself room to expand as an actor. Scott Adkins plays ‘Mike Fallon’, a hitman whose specialty is making his victims look like they’ve been in an accident. Fallon is part of a faction of contract killers filled with a group of colorful characters with their own signature murder styles. Most notably, the collection of killers include AMY JOHNSTON (Lady Bloodfight), MICHAEL JAI WHITE (Spawn, Black Dynamite) and RAY PARK (Star Wars: The Phantom Menace, G.I. Joe). This is a fun aspect of the film that is able to play around with cinema’s different versions of assassins ranging from the blunt force psycho to the stealthy finesse killer.

They all operate from a pub that is run by Fallon’s mentor, Big Ray, played by RAY STEVENSON (Punisher: WarZone, G.I. Joe: Retaliation). Fallon admits that whenever he has to expire a mark, he never sees them as people, even when he’s face-to-face with them as they die. He’s not one to get caught up with any of the people targeted by a client. This is until his ex-girlfriend is found mysteriously killed. He is unsatisfied with the police report and believes it’s been covered up to look like an accident — a trade he’s able to decipher like he’s Sherlock Holmes. This, and a double-cross on him placed by Milton, played by DAVID PAYMER (Redbelt), sends Fallon on a mission to find who sent assassins to kill his ex-girlfriend and tried to kill him.

This movie, by far, is the Scott Adkins vehicle with the most personality. It’s got a dark humor and raw style that’d be at home in a Guy Ritchie-London-crime-movie. Adkins, previously, has been able to turn his famous role as prison fighter, ‘Boyka’, from a villain to an anti-hero not unlike Wolverine. What he has in Mike Fallon is, not only his native English accent, but a lighter-yet-wicked role. He’s a guy you could see yourself having a drink with at a bar. He’s accessible, but sometimes rough around the edges. He’s a nice guy whose been too exposed to London’s underground and embraced it. This is probably the funniest he has been in an action role. 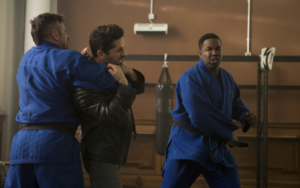 If you are a Scott Adkins fan, you expect a high quality of action. In ‘Accident Man’, the fights are more grounded than his usual fare. TIM MAN‘s choreography pulls back on the use of his signature gymnastic moves. His flashy spinning jump kicks and all their variations aren’t as prevalent as in the ‘Undisputed’ films. The choreography blends a good use of kickboxing, karate and ju-jitsu. When you have Adkins in a movie with Michael Jai White and Ray Park, it feels inevitable they’re going to have to fight at some point and here we get a couple of pretty rousing two-on-one battles with these fan favorites. Unfortunately, it feels like it’s a bit too late. Both Ray Park and Michael Jai White, who have been incredible specimens in the martial arts cinema, seem a little stiff in this movie. Both look to be cultivating more mass to the point that some flexibility has been sacrificed. This is especially evident when compared to Adkins, who has been able to keep his physicality and speed in tact. This is not to say these sequences are not fun nor a good example of their capabilities, but there is definitely a feeling of them starting to get past their prime. Through it all, the fight scenes still delight the biggest martial arts fan. There is a cheeky reference to the Bruce Lee ‘Game of Death’ motorcycle gang and a one-on-one bout with Amy Johnston that involves a little swordplay with a katana. 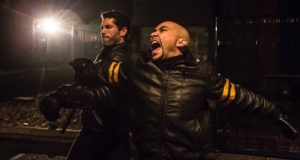 The action is brutal and even funny at points. This movie certainly earns an R rating. There is blood galore, although never too gory. ‘Accident Man’ is ‘Deadpool’ meets ‘The Mechanic’ with a side of ‘Boyka’. Adkins has a new character that can spawn a new franchise for him. 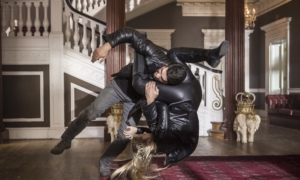 If you want a sequel to ‘Accident Man’, please support the film and purchase the Blu-Ray/DVD by CLICKING HERE.