UPDATE: CLOSE RANGE is set to have a limited release in theaters and on iTunes December 4th, 2015! 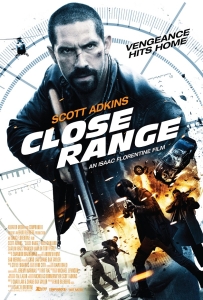 The dynamic duo, director ISAAC FLORENTINE and martial arts star SCOTT ADKINS, is at it again! After collaborating on such fan favorites as the ‘Undisputed’ sequels and the ‘Ninja’ series, Florentine directs Adkins once again in the new action thriller CLOSE RANGE! Check out the new poster (above) shared by Adkins himself from his Official Facebook page!

SYNOPSIS: A man desperately tries to save his family from a drug cartel and corrupt authorities. After rescuing his kidnapped niece from the powerful cartel, Colton MacReady (Adkins) begins a relentless fight to save his family who are now being targeted. The cartel has descended upon his secluded ranch with a thirst for revenge – in tow is a corrupt local sheriff and his crew of deputies, ensuring that help won’t be coming any time soon. What ensues is a non-stop assault on the ranch, a blow-by-blow survival marathon for Colton to protect his loved ones and save his life.

From a previous interview with MovieCricket.com, Adkins describe his character as: “A bad-ass character more like what Boyka is. One of those ‘take no shit’ types. He will be very fun to play…I like to mess about playing all sorts of characters but I do enjoy playing that sort of character. I do feel it comes naturally to me for some reason – not that I’m like that in real life – but I have a handle on how those parts are meant to be played.”

Sounds good to me!