Looks like BIANCA BREE will be carrying on the action lineage from her father, JEAN CLAUDE VAN DAMME, by starring in a new martial arts film called KICKBOX! 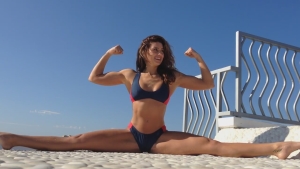 She is set to co-star with martial arts actor ALEX WRAITH (No Tears For The Dead, Killer Feet), who will also be handling directing duties.

‘Kickbox’ will film entirely in Thailand.

Check out Bianca’s fight reel (w/ Wraith) below to have a taste of what she is capable of: