UPDATE: Get ready for more TIGER COPS as development fundings has been awarded for additional episodes! Expect a release sometime in 2019. Stay tuned!

UPDATE: All three episodes of ‘Tiger Cops’ can be viewed over at the Official YOUTUBE Channel HERE.

UPDATE: The Official Trailer is here!

Back in 2015 Tran and director ADRIAN CASTRO collaborated on a short film (made as trailers) called ‘Tiger Cop 1 & 2’ with action choreography by TRUNG LY (Truy Sat). The short successfully captured everything that made the 80s golden age of Hong Kong action cinema so good. From the music to the cinematography to the wild sound effects/dubbing. 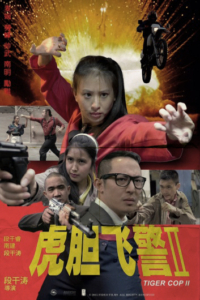 It is still too early to know if ‘Tiger Cops’ will be a featured film, a TV series, or even a web-series.

Stay tuned for more details. In the meantime, check out the ‘Tiger Cop 1 & 2’ trailer below to get a taste of what to expect.