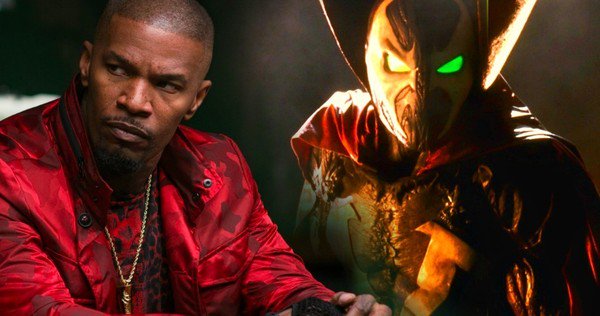 Previously played by martial arts star Michael Jai White (Undisputed 2) back in 1997, JAMIE FOXX (Django Unchained) is set to step into the role of ‘Al Simmons’ in the upcoming reboot of SPAWN.

Creator TODD MCFARLANE will make his directorial debut from a script written by himself as he made the announcement via Instagram:

… ME with new SPAWN!!! Official Spawn Movie Update!! . We’ve cast ACADEMY AWARD winner @iamjamiefoxx as #Spawn in the upcoming #SpawnMovie produced by @blumhouse!!! This is the first of more BIG announcements to come, so stay tuned for more. Here are some photos of Jamie and me… including one from WAY back in the day. We’ve been talking about this for real for a long while… . . Link in bio for full article! . . . TODD

For those unfamiliar with the comics, ‘Spawn’ follows “Al Simmons, a member of a CIA black ops team who is betrayed twice. After being set up by his cohorts to be murdered with his corpse set aflame, Newman is double crossed in Hell. He is convinced to become a Hellspawn warrior in exchange for being able to be reunited with his wife. But Spawn finds himself stuck in a demonic creature shell, and that his wife moved on and married his best friend. So this is one pissed-off antihero who attends to dispatching the scum of the city in good and evil battles that encompass Earth, Heaven and Hell”.

The reboot will lean towards more with the horror elements as McFarlane stated to DEADLINE: “If you want to see something creepy and powerful where you go, just what the hell was that? I’m not going to explain how Spawn does what he does; he is just going to do it. We’ll eventually do some of the background if we make a trilogy, but that’s not this first movie. The first movie is just saying, do you believe? And if you believe than that’s good because I’m hoping to take you for a long ride with this franchise.”

Produced by Blumhouse Productions, the film is said to have a very low budget in the $10-$12 million range, so do not expect a visual effects spectacle as oppose to more of a character driven horror thriller.