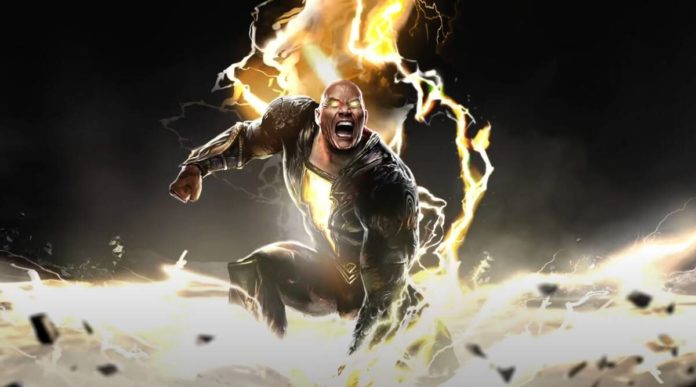 UPDATE: Looks like we have to wait a bit longer to see Black Adam on the big screen. As seen in the announcement made by Dwayne Johnson himself, the release date has been pushed back from July 29th to October 21st.

UPDATE: Have a look at the opening clip from Black Adam!

UPDATE: Veteran actor Pierce Brosnan (GoldenEye, The Foreigner) is set to join the cast of Black Adam. Brosnan will portray Kent Nelson aka Dr. Fate, a son of an archeologist who was taught sorcery skills and given the magical Helmet of Fate.

UPDATE: Actor Aldis Hodge (The Invisible Man) is set play Hawkman, the leader of the JSA. Dwayne Johnson announced the casting via Instagram:

THIS IS HAWKMAN 🦅 A pleasure to welcome @aldis_hodge to BLACK ADAM. HAWKMAN is a critical leading role for our movie, as he is the fiery leader of the JSA (Justice Society of America) and one of the most beloved and legendary characters in the DC UNIVERSE. I called Aldis personally as I wanted to surprise him that he got the role and it wound up being one of the greatest conversations I’ve ever had. Aldis: Hello? DJ: Hello, I’d like to speak to Aldis. Aldis: Who is this? DJ: This is Dwayne Johnson. * long pause Aldis: Whoever this is stop playing on my phone. DJ: This is Dwayne, is this Aldis? * longer pause Aldis: This shit ain’t funny, I said stop playing on my fucking phone. DJ: Aldis, this is DJ. I just called to say thank you so much for sending in your audition – it was great and I really appreciate the efforts you made. Just wanted to say thanks and best of luck in all you do. And one more thing — welcome to Black Adam. * longest pause Aldis: I’m sorry you’ll have to hold on for a one second. * he puts the phone down and walks away and all I hear is inaudible yells 😂 Aldis: DJAYYYY OHHHHH SHIT!!!!!! * Im laughing my ass off by now. DJ: You ok? You’re gonna crush this role! We went on to have an awesome conversation full of gratitude, love and motivation. Can’t wait to work with this very talented brother. The perfect HAWKMAN. Let’s get to work. #aldishodge #jsa #hawkman 🦅 #blackadam⚡️

UPDATE Artists Jim Lee and BossLogic has teamed up to bring us the first (motion) Teaser for DC’s Black Adam!

UPDATE: Actor Noah Centineo (To All The Boys: PS. I Still Love You) has signed on to play Albert Rothstein aka Adam Smasher, who have the power of super human strength and growth. In the comics, Rothstein forms a very close brother-like bond with Black Adam. The duo eventually leaves the JSA and went on their own adventure.

UPDATE: Dwayne Johnson revealed to Screenrant that Black Adam will introduce the Justice Society of America aka JSA. Johnson stated: “JSA. We will introduce you to that, the world to JSA.”

The team includes such superheroes as Hawkman and Stargirl.

UPDATE: The Rock officially announced the release date for Black Adam via Instagram. Mark your calendars for December 22, 2021.

The Man in Black ⚡️ Like most kids growing up, I dreamed about being a superhero. Having cool superpowers, fighting for what’s right and always protecting the people. It all changed for me, when I was 10yrs old and was first introduced to the greatest superhero of all time – SUPERMAN. As a kid, Superman was the hero I always wanted to be. But, a few years into my fantasy, I realized that Superman was the hero, I could never be. I was too rebellious. Too rambunctious. Too resistant to convention and authority. Despite my troubles, I was still a good kid with a good heart – I just liked to do things my way. Now, years later as a man, with the same DNA I had as a kid – my superhero dreams have come true. I’m honored to join the iconic #DCUniverse and it’s a true pleasure to become, BLACK ADAM. BLACK ADAM is blessed by magic with the powers equal to SUPERMAN, but the difference is he doesn’t toe the mark or walk the line. He’s a rebellious, one of a kind superhero, who’ll always do what’s right for the people – but he does it his way. Truth and justice – the BLACK ADAM way. This role is unlike any other I’ve ever played in my career and I’m grateful to the bone we’ll all go on this journey together. BLACK ADAM 12.22.21 ⚡️ Huge thank you to my friends, @jimlee and @bosslogic for this first time ever bad ass collaboration.

UPDATE: After years of planning, Dwayne Johnson’s busy schedule has finally open for him to suit up as Black Adam! Johnson announced the production start date via Twitter:

Very cool man, thank you.
Amazing detail.
This project has been with me for over 10yrs🖤⚡️
Production begins this July.
Appreciate the support. #blackadam #dc https://t.co/h8TPXMbcTx

(*News from 2014*) Dwayne Johnson via his Official FB Page confirming that he will be playing BLACK ADAM!

He stated the following:

“Kneel before his feet or get crushed by his boot..”

This role has been years in the making. A true honor for me to become my favorite comic anti-hero of all time – BLACK ADAM.

Lets have some fun.

DC is definitely bringing their A-game.