The Trailer for legendary Japanese director TAKASHI MIIKE (Ichi The Killer, 13 Assassins) 100th film BLADE OF THE IMMORTAL is here and it is bloody insane!

SYNOPSIS: Manji, a highly skilled samurai, becomes cursed with immortality after a legendary battle. Haunted by the brutal murder of his sister, Manji knows that only fighting evil will regain his soul. He promises to help a young girl named Rin avenge her parents, who were killed by a group of master swordsmen led by ruthless warrior Anotsu. The mission will change Manji in ways he could never imagine – the 100th film by master director Takashi Miike. 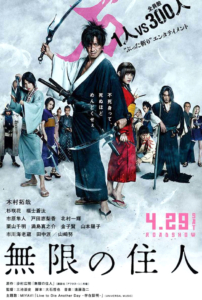 ‘Blade Of The Immortal’ is based on the 1990s manga series by Hiroaki Samura and stars TAKUYA KIMURA (2046), HANA SUGISAKI (Mozu The Movie), and SOTA FUKUSHI (Koinaka). Produced by Warner Bros. Pictures and Recorded Picture Company with Magnolia Pictures’ Magnet Releasing handling the USA distribution, the film is set to open on November 3rd in the U.S. and November 24th in the UK.