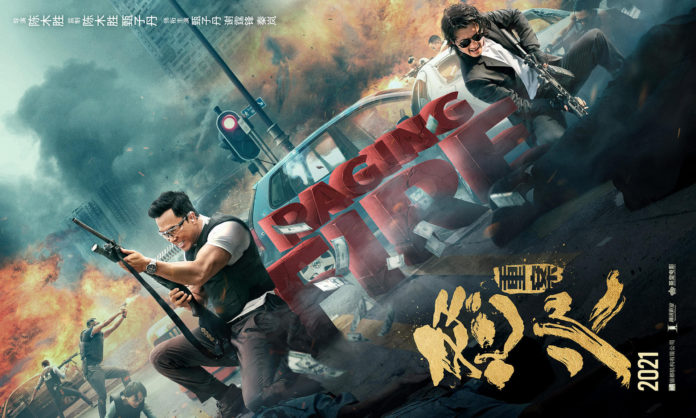 UPDATE: Well Go USA has picked up the North American distribution rights to Raging Fire. The film is expected to hit U.S. theaters on August 13th! See the U.S. Trailer below.

UPDATE: Check out the explosive new Trailer below!

UPDATE: The latest Poster and images from the late Benny Chan’s Raging Fire is here revealing that the film will be released sometime in 2021. Starring alongside Donnie Yen and Nicholas Tse are Ray Lui, Qin Lan, Jeana Ho, Patrick Tam, and Ben Lam.

UPDATE: Have a look at the Official Posters and Teaser below!

UPDATE: Check out these images from the set of Raging Fire featuring leading man Donnie Yen and Nicholas Tse!

UPDATE: Check out the concept teaser for Raging Fire below!

UPDATE: Plot details has emerged with Donnie Yen portraying “Shan, a righteous cop who is admired by the police force to have solved many cases. One day, his past comes back to haunt him when his sting operation is attacked by a mysterious group of criminals led by Ngo (Nicholas Tse), his former protégé. Ngo was once a talented cop who admired and respected Shan. However, a terrible accident sent him to prison three years ago turning him into a furious man with the aim to kill everyone who wronged him – including his former mentor!”

Director Benny Chan emphasizes that this film is all about anger and rage. Whether you are a cop or a criminal, the film will focus on this emotion.

(Thanks to our reader Danny Ho for the info!)

UPDATE: After working together on 2006’s Dragon Tiger Gate and 2009’s Bodyguards And Assassins, Nicholas Tse is set to reunite with Donnie Yen for a third time in Raging Fire. Take a look at the film’s teaser Poster above.

Veteran actor Ben Lam (Legend Of The Wolf, Police Story 2) is also part of the cast as they announced the project at FilmArt 2019 in Hong Kong.

UPDATE: Looks like the long awaited collaboration between director Benny Chan and martial arts superstar Donnie Yen has gotten a major facelift. The film is now titled Raging Fire with a totally different script that may see the action setting in Hong Kong instead of South America as intended before.

While speaking at the Hong Kong Derby promo event, Yen expressed his excitement for the project and how he is preparing for the role stating:

“I’ve been waiting a long time to work with Benny Chan and for him to put this project together! I urged him to film it in Hong Kong so I can still spend time with my family. The film is a cop thriller with lots of fight action! A lot!”

“I have been training hard every other day! I lost a lot of weight doing ‘Enter the Fat Dragon’ and ‘Ip Man 4’. But now I’m preparing a muscular physique for director Benny Chan’s ‘Raging Fire’ (aka ‘Crossfire’) which will start very soon. My ideal weight will be achieved in another 3 weeks time. I want to get back to ‘xXx’ physique. I want to go back to modern fighting styles like ‘SPL’ and ‘Flashpoint’. There’s gonna be a lot of fight scenes in this film. I want to make it even better. It will be a crime film, which will begin production at the end of the month.”

If you understand Chinese, check out the clips below to hear Yen speak for yourself.

UPDATE: According to BACKSTAGE production on ‘Crossfire’ has officially been pushed back. Perhaps this is due to Donnie Yen’s commitment with Disney’s ‘Mulan’, which is currently in production. ‘Crossfire’ and the live-action adaptation of the hit video game ‘Sleeping Dogs’ are the two films that are next in line in Yen’s long list of upcoming projects.

In the meantime, have a look at the more in depth synopsis of the film below.

SYNOPSIS: A former high-ranking Hong Kong police inspector named Eugene Lai “Donnie Yen” is in shock learning news of his wife. She was on a clandestine mission in South America when she and her unit was attacked by unidentified assailants leaving everyone dead except for her, whose fate is unknown. Lai takes an immediate trip to the other side of the world to try saving her but is pursued by the local police as well as the drug cartel intent on killing him. Determined to get to the bottom of the dark mystery surrounding the case, Lai eventually discovers the mastermind responsible for the attack; an enigmatic drug lord known as “The Poet”. Lai joins his comrades-in-arms to engage in a “Scorch the Poet” campaign that in turn reveals all the secrets concealed behind the scenes.

The film follows Yen in ‘Taken’-mode as a former police inspector who travels to South America in search of his kidnapped wife. Both Chan and Yen will serve as producers.